Yes it sounds pretty wacky, but it's a way of writing about an ideal society, as envisaged by Plato in The Republic. I started by reading the sequel, Philosopher Kings, and am now reading the first one, The Just City, by Jo Walton.

Athene decides she wants to start an experiment, conveniently in a place that will be obliterated, so it won't affect history.  Whoever prays to Athene that they can live in The Republic is magically transported to this place, followed by 10,000 children who were slaves.  Women are equal with men; there are robots doing routine work, so slaves are not needed in order for the rest of the inhabitants to be free to pursue 'excellence'.

Another twist is that the Gods Apollo and Athene are also there, incognito...

A good and thoughtful read.
Posted by Janells at 09:32 No comments:

For now this is a list of books I found moving, that expanded my perspective and knowledge as well as involved me.

We Are All Completely Beside Ourselves - Karen Joy Fowler
Has a great plot twist that changes everything and opens up a new perspective on humanity.

The Round House - Louise Erdrich
A crime novel set on a Chippewa? reservation, a coming of age novel.. Won the National Book Award for Fiction in 2012 (US).
Posted by Janells at 11:05 No comments:

I have just come out of this book's world so am getting my thoughts down now.  It's a true story, about an English literature lecturer in Iran during and after the Revolution there, and the girls she teaches, as well as about the conditions there, especially for women, and interwoven with this, a critique of the books and authors they discussed.

Azar Nafisi eventually stopped teaching in Iranian universities, and organised a regular meeting with a group of young women to discuss literature in her home.  She gives fictional names to these women and has changed some of the details, however this doesn't dilute the power of what she has to say.  She relates the real life issues of the group and the intricacies of novels by Nabokov, James, Austen and others with such passion and intelligence, it made me want to read Henry James for a start and gave me more of an understanding of what happened in Iran.

When the revolution first began there was hope mixed with huge uncertainty, with many different political voices united in making change happen.  Then the extremists took over, executions happened and women became 'half the worth of men' and had to endure daily scrutiny to ensure they conformed with new rules about clothes and behaviour.  Offenders could be thrown in prison; some were raped and executed.  Two of her 'girls' spent time in prison, where executions happened nightly and seemed arbitrary.

The book is not all gloomy - the literature group enjoys themselves in their little 'haven' from reality, and some relaxation of the rules eventually happens so they can have a little freedom, but not much.
Posted by Janells at 12:22 No comments:

I Capture the Castle 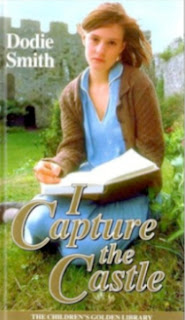 I have just finished I Capture the Castle, a book by Dodie Smith I read a long time ago and had completely and happily forgotten, so it was like reading a new book except I knew I would like it.  It has one of the best first lines: "I write this sitting in the kitchen sink."

Although the setting is romantic - a ruined castle with a poverty-stricken family whose former bread-winner has writer's block - it is the story and developing character of the narrator, 17-year-old Cassandra and her family which is the point of the book.  Cassandra writes in her journal what happens when the family, at their wits' end regarding generating enough income, meet a rich American family who have inherited the local stately home.

Cassandra's older sister Rose is determined to marry for money.  Stephen, almost adopted brother, has fallen for Cassandra.  Topaz is the passionate 'muse' and ex-artist's model who makes for a wonderfully eccentric stepmother.

What I like about these characters is that they are rounded:  although Topaz, for example, goes naked in the rain, she also is very practical about cleaning the house.  Rose isn't completely mercenary either, and Stephen ends up doing something completely different from what you'd expect.

I also loved the description of the seasons in England, and the atmosphere of living in a moated castle.  Also the impression that England and English have on the Americans; Dodie emigrated to the USA from England, so she knows:  one American says that fall is melancholy here and it isn't in the States.  I have had that difference in feeling too, though mine was the other way round, maybe from homesickness.

And then Cassandra falls in love... you'll have to read the book to find out what happens then.
Posted by Janells at 12:23 1 comment: 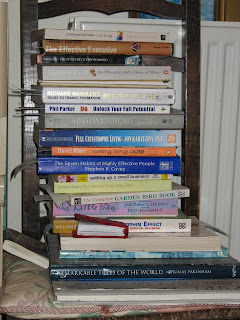 This is my bookpile in the kitchen.  It doesn't have any fiction in it - which is what I mainly read.  That pile is in the sitting room and is mostly library books.  This pile has reference books in it - poetry, art, self-help - and is mostly half-finished books.  Maybe my project for 2012/13 is to finish off the half-done ones!  See 'Stuck in a Book' and other book blogs for other 2012 book project ideas.
Posted by Janells at 09:57 No comments:

The Magician's Assistant by Ann Patchett

I liked this book, which was gently readable despite potentially depressing subjects - AIDS, unrequited love, family conflicts. It was good to read a book that dealt with an unusual relationship of a woman who has finally married the man she loves - who is gay and is not in love with her.  His gay partner has recently died of AIDS.  The woman is left to mourn him after his sudden death - and her partnership with him as magician's assistant must also end - though it has future benefits she does not foresee.
Then she is called to Nebraska to meet his relatives, hitherto unknown to her.  Although this could have been the last straw of a painful life, it is not at all - and there are interesting worlds to explore: the sunlit luxury of LA and small-town, snow-bound Nebraska; the making of magic tricks, and the generosity of the family she gets to know. I loved the bits about magic, and the optimism of life moving on and new beginnings.
Posted by Janells at 09:46 1 comment:

News re Murder Must Advertise - on BBC 7!

Have just discovered that this last book I reviewed is being broadcast, with the great Ian Carmichael as Lord Peter Wimsey, on BBC 7.  Catch up on episodes with the i-Player by going to this link:
http://www.bbc.co.uk/programmes/b00f9wxy/episodes/player.  There are 5 days left to listen to the first episode.
Posted by Janells at 09:34 No comments: